Preparing for the Future of Mobile – Wearable Tech

Recently, a new term has been tossed around the tech industry and has been gaining more ground every day: Wearable Technology. I know that many people think that this concept is still a long way from becoming popular—with such products as Google Glasses and the Apple iWatch not yet widely available or just beginning to make their way into customers’ hands (or wrists . . . or faces!). But there are already many other products that have snuck in and found footholds in the market such as Android Wear, ARM, Fitbit, and Pebble—just to name a few.

Now, there are some naysayers who claim that wearable tech is just a fad. They believe that it will blow over as another silly trend, but to them I say nay. Nay, you naysayers. You see, a recent report from the Pew Research Center Internet Project indicates that 83% of industry experts believe that wearable technology will see huge growth within the next ten years.

Is your site ready for the future? Here are seven things you can do right now to make this transition easier for users: 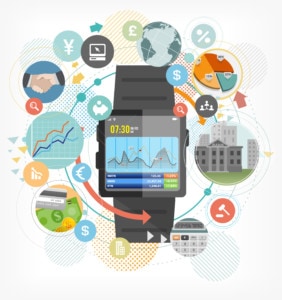 This one is at the top of the list. We have touched on this before, and it will always remain important. Make sure your site can adjust to any conceivable mobile viewport. Read more about responsive web design.

The key to the game is instant access. That’s why people are deciding to wear their tech rather than keep it in their pockets. This means your sites need to be fast, fast, fast—not only in connection speed, but also in functionality. If something is not evident to the user right away, it might be missed completely.

What does this really mean for your Web site? Basically, your site should be dynamic; it’s not just about simply being pretty anymore. You need to have a clear understanding of who your users are and of the best, quickest ways to meet their needs.

This has been trending for a few years now, and don’t expect it to wane anytime soon. Rather, you can plan on minimalistic trends growing exponentially. The simpler the better when designing for multiple devices.

The new standard will be 16 px font or higher. Heck, it should be the current standard.

These will have no place in wearable technology. You might as well get rid of them now.

Develop your site with usability as your number-one priority. Create a site that intuitively anticipates users and recognizes how they will interact with your site. For the users, interacting should feel like second nature.

Wearable technology is still in its infancy and has only just begun to take off. To get a better idea of what is in store for wearable smart tech, all you need to do is look at its predecessor: the mobile device. Smartphones have had an enormous influence on the world of the Web—more so than anyone could have ever foreseen.

Be prepared for what is to come in the not-so-distant future. Here at Ocreative, we can make sure that your site is ready to take on the future! Give us a call today at (262) 567-1164.