When it comes to disaster preparedness, most people think they are ready to ride out the storm. But what if the storm comes a second time, and with even more force? What if the only way to avoid the disaster is to be proactive before it hits? Back in 2015, Google announced the launch of its new mobile ranking system, dubbed Mobilegeddon by programmers and the press. Now, just over one year later, they have made a similar announcement, stating that “beginning in May, we’ll start rolling out an update to mobile search results that increases the effect of the ranking signal to help our users find even more pages that are relevant and mobile-friendly.”

Become Mobile-Friendly or Get Buried in Search Results 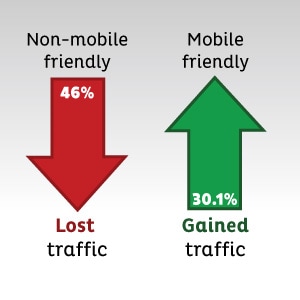 Your First Aid Kit – There May Be More Work to Do

Something to keep in mind is that just because your site is adaptive or responsive doesn’t mean it’s 100% mobile-friendly. There are other things that need to be considered. Do you use Adobe Flash on your site? Do you have faulty redirects, blocked files, or slow page loads? Any of these things can make your site rank lower in search results. An easy way to find out is to run your site through Google’s Mobile-Friendly Test. This tool will give you a good indication of which elements you need to work on.

Ways to Avoid Mobilegeddon and Make Your Website Mobile-Friendly

The longer a site waits to become mobile-friendly, the more traffic it will lose. Luckily, there are ways to turn things around. The best way to recover or even increase your site’s traffic is to make mobile-friendly optimizations, such as the following:

Ranking in search engines does matter to a website’s success and is an essential component of any marketing plan. If you are ready to make the leap or just need a few updates, give Ocreative a shout. We can create a plan that’s customized to you and your site’s needs.