Let’s start with square one:  What on earth is a Hackathon?

To put it simply: a Hackathon is collective code creation or collective programming.

As a web developer (or web programmer, if you prefer), I find this concept to be very exciting. Besides being a fun learning experience for programmers and an efficient way to develop an application rapidly, in my view, these events provide another benefit. Events like Hacakthons help to question what I believe to be some incorrect notions about the “typical” present-day programmer.

One incorrect notion that I believe Hackathons question is the notion that programmers are corner-dwelling, socially awkward introverts.

While I have no doubt that there are computer programmers out there who fit this description, I wonder just how many “introverted corner-dwellers” really exist?

From a personal standpoint, I’ve met more programmers that are social, have a bustling personality, and don’t fit the supposed stereotype all that well. While I realize that this evidence is anecdotal and not scientific in the least, it would seem that Hackathons and introverted programmers go together like oil and water. Yet lots of programmers show up to Hackathons all over the country.

Moreover, from my perspective, present-day programming is generally a collaborative effort that not only requires socialization and collaboration – it thrives on it!  Hackathons certainly support this idea as well – it’s amazing the synergy that can be developed when working in a group on a coding project.

While it’s all well and good to describe to you what a Hackathon is and why I believe it has the power to change perceptions about programmers, it’s probably better to have a concrete example of a Hackathon so you can get an idea of what these events are all about. 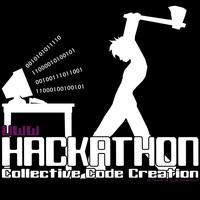 On Saturday, December 4, 2010, I was in attendance of the first-ever UWW Hackathon.  Held at Timothy J. Hyland Hall, the new business building at University of Wisconsin-Whitewater (my alma mater), the Hackathon was 18 hours of collective-coding genius.

At the Hackathon, I was joined by the Principal and Co-Owner of Ocreative Design Studio, Matt Koeppel. While neither of us participated in any of the programming, we did enjoy the event immensely in our role as judges.

Most impressively, I found that many of the students who attended the event had some very unique and innovative ideas. Students created everything from useful calculators and mapping applications to full-fledged iPhone apps and games – all in 18 hours. The variety and depth of the projects attempted was noteworthy and impressive – especially given the time-frame. It was refreshing and reassuring to see the level of socialization amongst the students and obvious collaborative efforts going on with code.

Major kudos to UWW Hackathon organizer and developer Jonathan Stassen (jStassen.com) for pulling off such a great event – especially in such a short amount of time.

From all appearances, I believe the UWW Hackathon was a huge success, and I am looking forward to attending the next event soon.

Importantly, I’d also have to say that none of the folks who participated seemed to be introverted to the point that is commonly stereotyped. Granted, you could argue that the introverts avoided me …but how do I truly know?

And, for that very reason, I’m encouraging you to chime in…

I’m interested to hear your perceptions and opinions on the “typical” 21st century programmer. While every programmer is unique and should be judged individually, what kind of trends, if any, do you notice about programmers as a whole these days?

Are most of the programmers you encounter introverted or extroverted? Does it depend on the setting they’re in? What kinds of interactions are required of programmers you’ve met?

If you’re a programmer yourself, what kind of perception do you think you give off from a personality standpoint? Do you interact with others on a regular basis? If so, how? Do you feel that collaboration is an important part of programming? Why or why not?

Of course, the questions can go on and on. That’s part of the fun. Let’s make this into an interesting discussion and see what kinds of conclusions (if any), we can draw.